Website owners and developers who use WordPress can now accept MIOTA coins thanks to a new plugin that was developed by IOTA community member @shortaktien (Alexander), who went on to announce its availability through the following tweet.

Finally my #plugin for #WordPress is online. Now everyone can quickly and easily find and install the plugin in the integrated library.
Now it’s time to wait for Ledger.https://t.co/C6YNNEuQsH#iota #crypto

The WordPress Plugin Could Increase Accessibility and Mainstream Adoption for IOTA

It is with the launch of the IOTA WordPress plugin that the team at Weiss Crypto Ratings has concluded that its availability could increase accessibility and mainstream adoption for the digital asset. The team at Weiss made this conclusion through the following statement on Twitter.

Developers from IOTA community have released plugin that allows all WordPress sites to accept IOTA in a matter of clicks. WordPress is one of the world’s most popular content management platforms, and this could increase accessibility and mainstream adoption for IOTA.

More on the IOTA Plugin on WordPress

The IOTA plugin on WordPress is aptly named ‘Pay With IOTA’ and is designed around the IOTA button. The latter is a simple button coded in html that can be used to accept payments, donations or to display the IOTA balance in your wallet. The IOTA WordPress plugin thus allows you to insert the IOTA button on any website, within an article, a page, or as a widget.

IOTA (MIOTA) is in Bearish Territory But Hinting at a Reversal

With respect to price action, like most altcoins, IOTA/USDT is facing a bearish scenario as the digital asset trades below the 50-day, 100-day and 200-day moving averages as seen in the following daily chart. 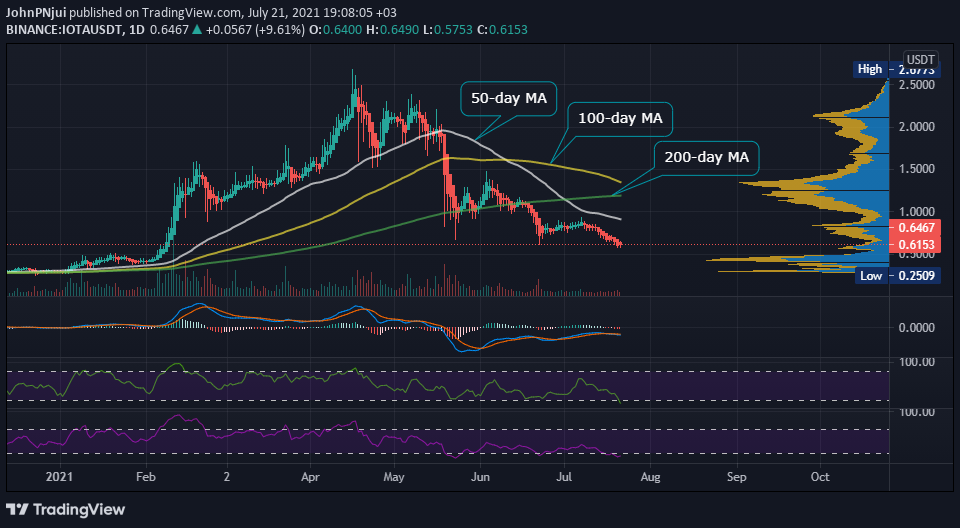 In addition, the following can be observed from the daily IOTA/USDT chart.

This website uses cookies to improve your experience while you navigate through the website. Out of these cookies, the cookies that are categorized as necessary are stored on your browser as they are essential for the working of basic functionalities of the website. We also use third-party cookies that help us analyze and understand how you use this website. These cookies will be stored in your browser only with your consent. You also have the option to opt-out of these cookies. But opting out of some of these cookies may have an effect on your browsing experience.
Necessary Always Enabled
Necessary cookies are absolutely essential for the website to function properly. This category only includes cookies that ensures basic functionalities and security features of the website. These cookies do not store any personal information.
Non-necessary
Any cookies that may not be particularly necessary for the website to function and is used specifically to collect user personal data via analytics, ads, other embedded contents are termed as non-necessary cookies. It is mandatory to procure user consent prior to running these cookies on your website.
SAVE & ACCEPT